Vivegam Release in 10 Days: Vivegam is an Indian Tamil language movie. It is a spy thriller action genre. The movie was written and directed by Director Siva. The Kollywood fame ‘Thala’ Ajith Kumar is playing the leading role in the movie. The other stars of the movie are Kajal Agarwal, Vivek Oberoi and Akshara Hassan.

The Vivegam teaser was released on May 11 which hits the huge response after the release in an hour. The audio launch of the movie was from August 7. ‘Surviva’ was the very first song that gets released which shows one should never give up on anything followed by ‘Thalai Viduthalai’. The song was enjoyed the lot by Ajith fans and all the people who heard this. The music of the movie Vivegam was composed by Anirudh Ravishankar. The movie is dubbed to be released in the Telugu language. 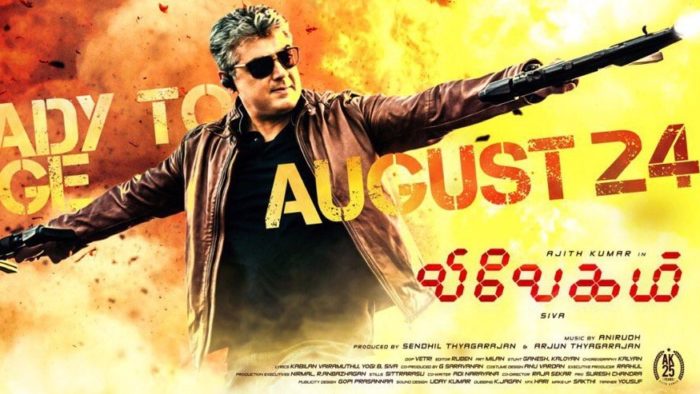 From the day of the teaser, there arise the interest among the audience for the movie. After hearing the songs of Anirudh the waiting for the movie was increased. The 70% of the movie was shot in Europe and remaining in India. It is an action thriller movie. Kamal Hassan second daughter Akshara Hassan has played an important role in this movie. This is the very first movie for her in Kollywood. All these things created more interest among the public.

Finally, the Vivegam team has announced that Thala Ajith’s Vivegam movie was set to release on August 24, which will be the big treat for Ajith fans were followed by holidays for Vinayagar Chadhurthi and weekend. The film is expected to be a Blockbuster Hit as it is releasing in holidays. Still 10 days more for the release of Vivegam movie. Stay calm for the release and enjoy the movie Vivegam in theatres.