Women Enter into Sabarimala Temple: A five-judge Constitution Bench of Supreme Court referred the issue of ban on Women entry to the Sabarimala Temple which is located in Kerala on Friday. The Constitutional bench headed by the Chief Justice of India Dipak Misra who framed several questions such as can a temple restrict the entry of women and the case will be dealt with the question whether restricting the entry of women into the temple is violating the rights under the constitution.

The Constitutional Bench is also dealing with the question such practice of restricting the women to enter the temple is discrimination against women. Sabarimala Temple was located on the hilltop of the Western Ghats of Pathanamthitta district, Kerala. The management of the Sabarimala temple has said earlier the ban on women entry between the ages 10-50 was because they cannot maintain the purity on account of menstruation. 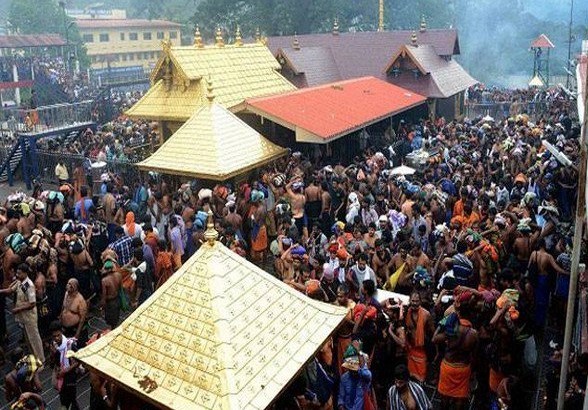 On November 7 last year, the Kerala Government has announced in the court the women of all ages are permitted inside the historic Sabarimala temple. Initially, the LD Government followed the women’s entry into the temple in 2007, which was later turned over to UDF Government. The UDF Government has taken the view that since time immemorial it is followed that the women of ages between 10 and 50 were restricted to enter the historic Sabarimala temple.

According to the people, some says that it is being practiced earlier where women are at the house only used as childbearing machine and for cooking that is why they were restricted to enter the temple. But now both men and women are equal. In today’s world, Women are becoming more powerful and stronger than men. Equality is the basis of the religion. So Women should be permitted inside the Sabarimala temple.