KKS Audio Launch: After Theeran hit, actor Karthi was committed to the film Kadaikutty Singam. The teaser of the movie is already released. Kadaikutty Singam is a Tamil language rural movie which is written and directed by National Award-winning filmmaker Pandiraj. Karthi makes the lead role along with Sayyeshaa and Meyyadha Maan fame Priya Bhavani Shankar in the female leads.

The movie Kadaikutty is simultaneously planned to release in Telugu as well. From the teaser, ‘Kadai Kutty Singam’ seems to be a promising family drama that incorporates elements of sentiment, comedy and earthy dialogues that is likely to strike a chord with the audiences. The film also seems to give prominence to farmers’ issues. The movie is produced by Suriya’s 2D Entertainments. 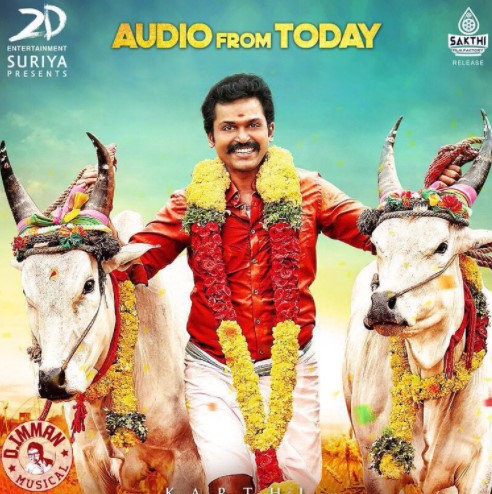 Other supportive roles in the movie Kadaikutty Singam include Arthana Binu, Sathyaraj, Bhanupriya, Viji Chandrasekhar, Ponvannan, Soori, Sriman and Soundararaja. The grand audio launch for the movie Kdaikutty Singam is set today at Sathyam Cinemas. The music for the movie is composed by D Imman. It is a great day for Imman and Karthi fans as the song of their movie are to be released.