RCB vs KKR: The 26th match of Indian Premier League is between Royal Challengers Bangalore and Kolkata Knight Riders. The match will start at 8 PM IST on 29th April 2018. The venue of the match is at M.Chinnaswamy Stadium, Bengaluru. The team RCB is led by Virat Kohli and the team KKR is led by Dinesh Karthik.

In the points table of IPL 2018, KKR is at the sixth place with six points and the team RCB is at seventh place with four runs. It is a tough situation for RCB as the team is at least position and they have to win more matches to qualify for the playoffs. Hence there expects some changes in the RCB playing XI and it is predicted that RCB will win this match against KKR. 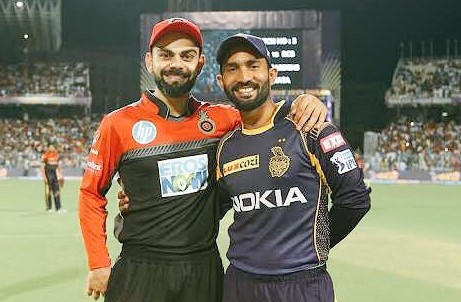 De Kock was out with 29 runs. Virat Kohli is on the strike. Hope RCB will score above 200 runs.

The live match of IPL 2018 Royal Challengers Bangalore vs Kolkata Knight Riders will be broadcasted on Star sports network. The live streaming of RCB vs KKR will also be available on Hotstar and JioTV.