Venezuela vs Colombia: The two bigger teams of South America Colombia to take on Venezuela in the World Cup Qualifying CONMEBOL today. The game will kick-off at Thursday, August 31, 2017, at 2:00 PM Pacific. The venue of the Venezuela vs Colombia match is at Estadio Polideportivo de Pueblo Nuevo. In the standing table of World Cup Qualifying CONMEBOL, Colombia is in the second place whereas the team Venezuela is in the 10th place. 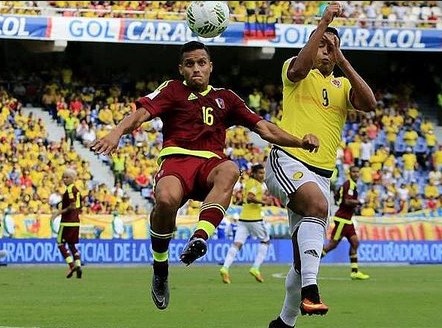 Venezuela is the team which is not good in the form. Colombia is performing well in this World Cup Qualifier. The experienced player Alejandro Guerra of Venezuela has got retired from the International Football. Now the team Venezuela has five young teenagers and hoping for the victory with them. In the team Colombia, Stefan Medina is not on the team due to injury and the player Carlos Bacca has been left out of the squad. The only star attraction player of the team Colombia is James Rodríguez.

In the last five head to head records between these two teams in World Cup Qualifying – CONMEBOL and International Friendly, two matches won by Colombia, two matches won by Venezuela and the other match ended in a draw. Hence it is sure that the team Colombia will win today’s match against Venezuela.