Magalir Mattum & VIP 2 releasing on August 11: After a smashing comeback on 36 Vayadhinile, Jyothika is currently waiting for the release of her another women-centric film, Magalir Mattum. Along with her, three other stars of South played in lead roles. Bhanupriya, Urvashi and Saranya Ponvannan are those three stars. At the current situation of Tamil cinema, it is difficult to find a suitable date for a film release. While the makers of Magalir Mattum has finally found a date and the film might release on August 11.

Though, an official announcement by the makers is yet to make. In another hand, Ajith’s Vivegam postponed to August 24. Also, actor Dhanush is also waiting for his VIP 2 release. The actor and the team confirmed the Velai Illa Pattadhaari aka “VIP 2” movie release date as August 11. 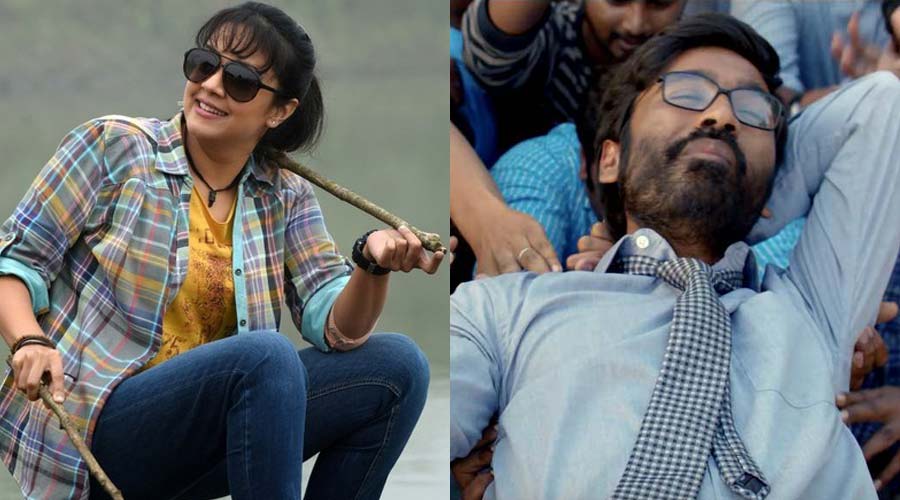 According to Bramma, will explore one of the many rarely spoken women-centric subjects. Jyothika’s own voice has sync in this film.

VIP 2 is the mark of the return of Kajol to Kollywood after two decades. She will appear in the role of a suave, conniving businesswoman. The film will release on the same date in Hindi as Lalkar. Also, the film dubbed in Telugu. Amala Paul, Samuthirakani and Vivekh are supporting key actors.

Comes to the Magalir Mattum, in the second poster of this film, Jyothika was seen riding a Royal Enfield bike. It caught a huge attention of the audience. At the same time, the director revealed that Jyothika will be seen riding the bike in a few scenes in the film.

Suriya is the producer of his wife’s film, which has music by Ghibran. As per the update, actor Suriya might have played a cameo in the film.

Along with the new teaser, the VIP 2 makers announced the new release date of the film on August 1. Dhanush himself penned the story and dialogues of VIP 2. After Minasara Kanavu in 1997 with Arvind Swamy and Prabhu Deva, the Kajol’s second Tamil outing is with Dhanush in Kollywood. Sean Roldan handled the music composing and background Score. All the lyrics in the film has penned by ‘Poetu’ Dhanush, and Sean Roldan.