Young Mustafa claims that his feat has been recorded in The Lincoln Book of Records. To confirm this, the Lincoln Book of Records has mentioned this information on its official website and has given him a prize for it. The width of the paper on which Mustafa Qur’an is handily recorded is 14.5 inches and the length is 500 meters. Kashmir-based photojournalist Basit Jaghar shared a video of Mustafa’s feat on his Twitter account. The video includes footage of a 500-meter-long scroll of paper containing the Holy Quran being taken apart. 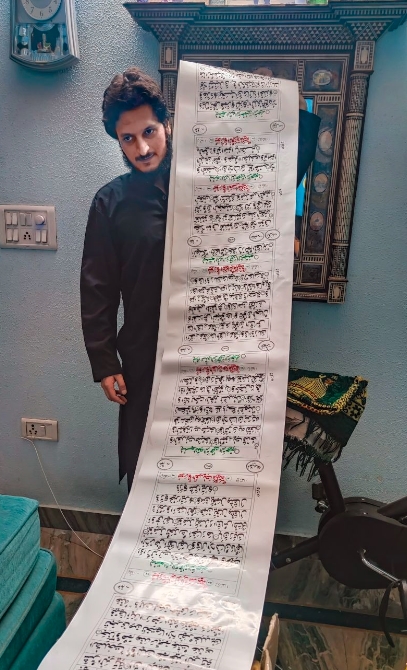 Basit Zagar, who shared the video, captioned it, “27-year-old Kashmiri calligrapher Mustafa-Ibn-Jameel has set a world record by writing the Holy Quran on a 500-meter scroll of paper in 7 months.” Meanwhile, young Mustafa, who spoke about his world record, said that it took two months to prepare the special art paper for calligraphy. As this special art paper was not available anywhere in the market, I ordered it from a factory in Delhi. Then he informed that he got special calligraphy ink for that.

Mustafa says that this recording project, which was completed in June this year, was completed at a cost of around Rs 2.5 lakh. This art paper border design took about a month. Designed with around 13 lakh dots. Then he said he laminated the entire roll. It occurred to me that Jamil, whose heartfelt desire was to write a copy of the Quran by hand, should use his God-given talent for calligraphy to do something unique. Mustafa said that the family appreciated my passion and supported him throughout the achievement project.

Also speaking, the accomplished youth Mustafa is very happy to have successfully completed this task. I put my love for Quran and calligraphy on paper. You can tell my passion from the fact that I spend about 18 hours a day on it.