An electric shock occurred in a van in Cooch Behar in West Bengal. 10 people died tragically. More than 19 people were seriously injured and admitted to hospital for treatment.

A group from Chitalkuchi, West Bengal undertook the Kanwariya pilgrimage. About 30 people took a van and went on a pilgrimage to worship the river Ganga. All of them were traveling in the area of ​​Cooch Behar when the vehicle suddenly got electrocuted and an accident occurred. As the pilgrims who traveled were trembling and fell down, the driver of the vehicle pulled over and called the bystanders for help. 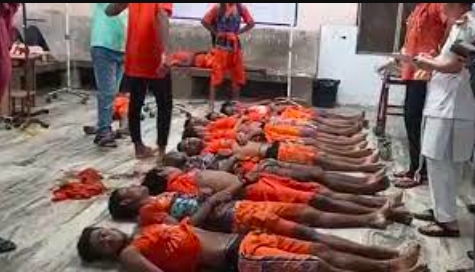 Neighbors immediately informed the ambulance and the passengers were admitted to Sangrabandha Government Hospital.

The West Bengal Police said that 10 people were found dead on arrival at the hospital and 19 others were injured and undergoing treatment. The police, who are investigating the incident after registering a case, have speculated that the accident may have occurred due to a fault in the DJ sound system wiring in the vehicle. Also, as the driver of the vehicle fled from the spot, the police is engaged in an intensive search to nab him.