Chennai Silks T.Nagar: Today early morning at 4’o clock there broke out a big fire in “The Chennai Silks” which located on the Chennai T.Nagar, Usman Road. It is one of the big clothing stores in Chennai where people used to take their clothes there. Many new collections and quality clothes will be available in the showroom. This building had a jewellery showroom on the ground floor.

The fire breaks out today was found to be due to the electric short circuit in the showroom. At the time of firing, there was 11 working man on the top floor of the shop. Fortunately, they were rescued safely from the fire. Seven fire tenders around T.Nagar came to the spot to extinguish the fire in the shop. 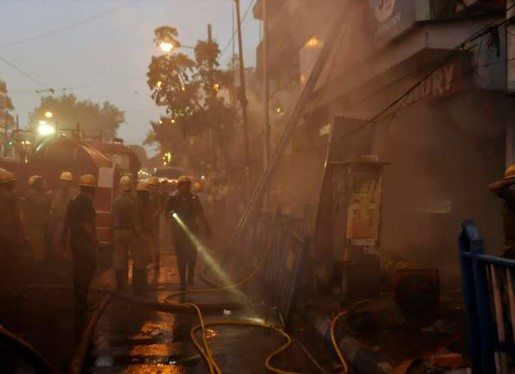 The fire is emanating over 8 hours and still, the fire didn’t extinguish completely. The fire spreads all the seven floors of the building. Due to continuous fire, the building is in big damage and there may be a chance of fall off of the Chennai Silks building. There started the cracks inside the building. So it is anytime the building may fall off. People living in the surrounding area are asked to move to the safe place.

The District Collector has come to the spot and examined the firing area in the building. He confirmed that the building is under severe damage and there may be a risk of fall off. So he asked people not to open the shops in the nearby areas and people are moved 100 metres away from the firing spot. So far the report says that the second floor got damaged and fall off but no people are injured. The Environmental Minister also examined the firing spot of the Chennai Silks. Many lorry water tanks were used to extinguish the fire inside the building.

It was first found out by the security guard of the showroom and soon the fire tenders came to the spot to extinguish the fire. The police started the investigation regarding this fire break out in such a big showroom. However, lakhs of clothes and clothes were destroyed in this fire which creates a huge loss to the owner.