Venezuela vs Uruguay: The Venezuela face against the team Uruguay today in the World Cup Qualifying – CONMBOL. The game will kick-off at 2:30 AM IST. The venue of the match is at Estadio Polideportivo de Pueblo Nuevo, San Cristóbal. In the last five head to head records between these two teams, Uruguay won two games, one match by Venezuela and the remaining matches ended in a draw.

In the standing table of World Cup Qualifying CONMEBOL, the team Uruguay stands next to the Brazil with 27 points which have difference of about 10 points with Brazil whereas Venezuela is at the 10 position with eight points. In the last five matches, Venezuela has lost one match and remaining matches ended in a draw whereas Uruguay has won one match, lost three matches and the remaining one match ended in a draw. 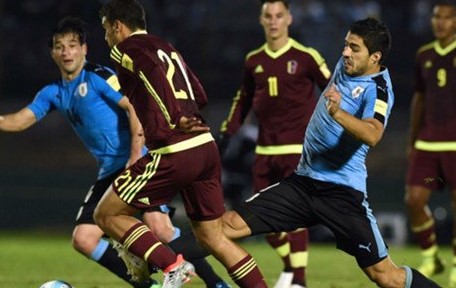 The Key player of Venezuela is Salomon Rondon and it is expected that the team would bring strong Playing XI. The team Uruguay will be lead by the Defender Diego Godin. It is predicted that Uruguay will win today’s match against Venezuela as they are in good form.

The World Cup Qualifying CONMEBOL match will be live streamed in the following channels.