India won 4 gold medals on the last day of the Commonwealth Games. With this, it moved up to the fourth position in the list with a total of 61 medals including 22 gold.

The 22nd Commonwealth Games was held in Birmingham, England. On the last day yesterday, the girls’ badminton singles final was held amidst great anticipation. In this, India’s PV Sindhu clashed with Canada’s Michelle Lee. Dominating from the start, Sindhu won in straight sets 21-15, 21-13 to win gold for the first time in the Commonwealth. 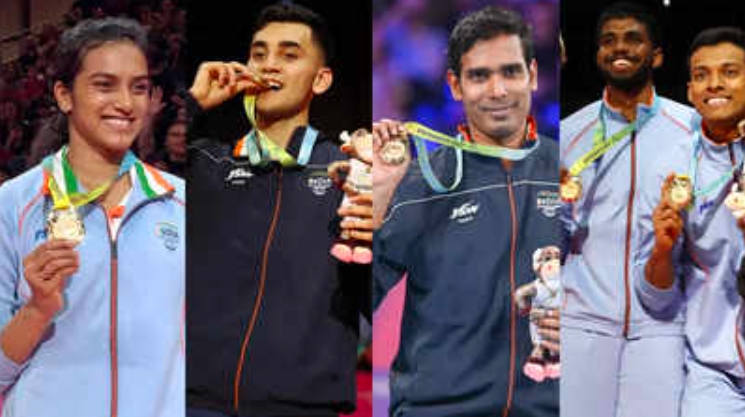 Subsequently, India’s Satvik Sairaj and Chirag Chandrasekhar clashed with England’s Ben Lane and Chen Wendy in the men’s doubles final. In this, the Indian pair, who had complete control over the match, won the gold medal by winning straight sets 21-15, and 21-13.

Tamil Nadu’s Sathyan Gnanasekaran won the bronze medal in men’s table tennis singles. Another Tamil Nadu player, Sarath Kamal, had a toe-to-toe with England’s Liam Pitchford in the final. In this, Sarath Kamal, who showed his experience, won the gold medal with a score of 4-1.

India vs Australia in men’s hockey final In this, the Australian team won 7-0 and won gold for the 8th time in a row in Commonwealth Hockey. India went on to win the silver medal after losing in the final.

As for the Commonwealth Games, Australia finished first with 67 golds, followed by host England with 57 golds. Canada finished third with 26 golds. India won 4 gold, one silver, and one bronze each on the last day alone. With this, New Zealand moved up to fourth place with a total of 61 medals including 22 gold, 16 silver, and 23 bronze.

The closing ceremony of the Commonwealth Games was held with spectacular performances. The Indian team was led by table tennis player Sarath Kamal and boxer Nikath Sareen carrying the national flag at the event held at Alexander Maidan.