Imaikkaa Nodigal Single Track: Imaikkaa Nodigal is an upcoming Indian Tamil Language crime thriller film which is written and directed by R. Ajay Gnanamuthu. The main leading roles in the film are played by Atharvaa and Nayanthara. Raashi Khanna is also doing the leading role and the antagonist role is played by the Bollywood director Anurag Kashyap.

The film is produced by Cameo Films India. The Cinematography of the film is R.D. Rajasekhar and the music was composed by Hiphop Tamizha. Ajay Gnanamuthu is the famous director who directs the successful horror film Demonte Colony. The film shooting took place in Banglore. 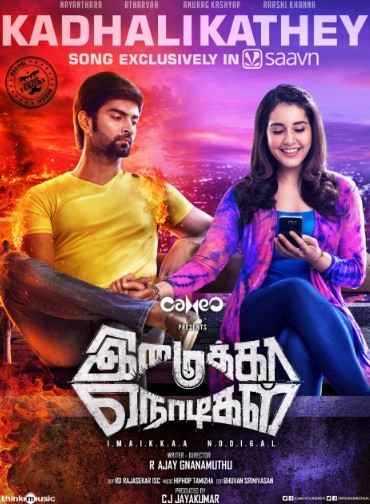 The single track of the film Imaikkaa Nodigal is released today. Single track ‘Kadhalikathey’ was released today and the music is composed by Hiphop Tamizha. The song can be downloaded from Gaana.com and Saavn websites. The team will confirm the dates of audio launch, teaser, trailer and movie release dates soon.